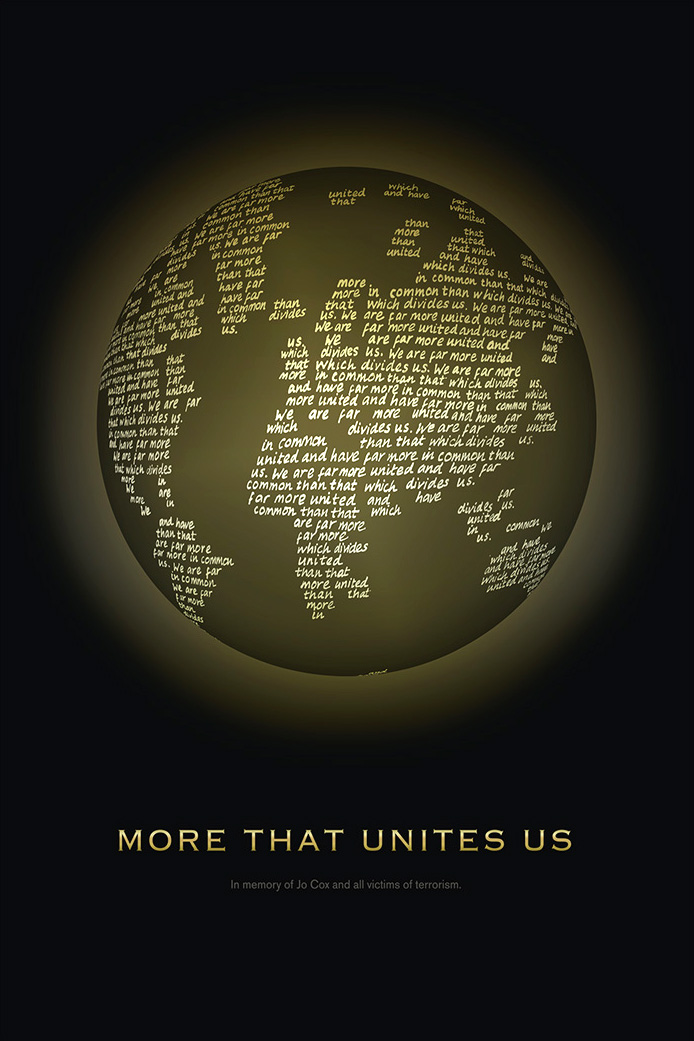 In the spirit of looking forward with a sense of hope in an achievable progressive future, political and otherwise, flyingleaps’ twelfth artists’ poster print in twelve months is a work by Raquel Macartney. More That Unites Us (2017), displayed on billboards across the capital, remembers Jo Cox’s and victims of terrorism worldwide.
All proceeds from the sale of Macartney’s signed, limited edition of 100 will go to The Jo Cox Foundation.
Raquel Macartney’s poster is a new iteration of an award winning design: a handwritten transcript of Jo Cox’s maiden speech rendered so as to create a map of the world. For flyingleaps the artist again used her handwritten version of the speech but this time it recreates the contours of countries to conjure up a globe surrounded by a golden halo. Beneath, in Copperplate, is a phrase both emphatic and hopeful: ‘More That Unites Us’. With this work Macartney wanted to communicate Jo Cox’s enthusiasm for social justice and the wit, vitality and commitment she bought to trying make the world a better place for the many and not just the few. Macartney is an extremely prolific and public-spirited arts practitioner. Social care, cohesion and provision, in much of her output, is arguably the ‘medium’ she works in. This can be seen in various projects such as Debris By Day, Debris By Night (2106): a Birmingham installation whereby a silhouette of the British Isles was created out of garments arranged on the floor space. At the close of the show, these ‘materials’ were parceled up and sent to organisations who then redistributed them to people in need. More recently she has been staging public sculpture events in which parents and children make plaster casts of their hands clasped together. Displayed alone these are moving three-dimensional ‘portraits’ of intimacy. When shown in large numbers the pairs of entwined hands also act as a visual testament to acts of compassion the world over. Macartney also created Dance4Jo (2017): a memorial tribute as part of the The Great Get Together. www.raquelmacartney.com
Info
June 15, 2017
by Adrian Burnham in
© FlyingLeap | Website Design by Four90 Designs