0
Contested Spaces: Dr. D and the Battle for Visibility in the City
03 December 2017
January 10, 2017 by Adrian Burnham in Critical Texts

Where Are We Going? 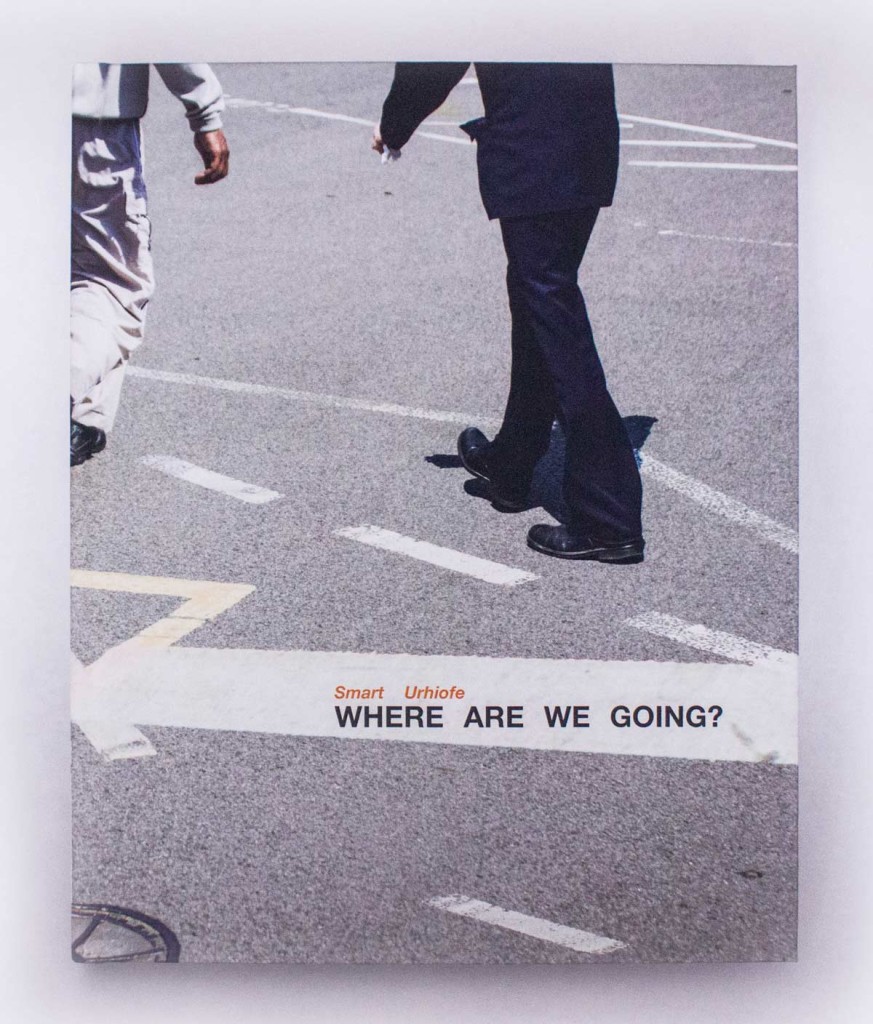 [T]he mass that carries off and mixes up in itself any identity of authors or spectators.[2]

In Smart Urhiofe’s new book Where Are We Going? the artist is both spectator and author: “I went around, for two years or more, with the camera plastered to my face. I just kept it there while I was walking through the city.” Dziga Vertov’s ‘I am an eye, I am a mechanical eye…’ chimes perhaps with Urhiofe’s modus operandi in this extensive photographic essay.

In his classic text Walking in the City Michel de Certeau refers to an ‘opaque mobility’ regarding the complexity of cities. Urhiofe has refused to be daunted by that complexity. Rather he has contrived his own particular viewfinder or frame through which to make a sense, senses of our urban entanglement. He has eschewed the ‘eye in the sky’ POV and the mythical clarity that’s supposed to result from any celestial viewpoint.

Instead Urhiofe has leveled his lens at an altogether less lofty aspect. There are no faces in this quietly riveting collection of images. No shoulders, barely any chests. A pared down view of the world then but this is anything but an unambitious project. Years of recording urban footfall, hundreds and hundreds of pictures: looking through the pages of Where Are We Going? Urhiofe has patently chosen not to ‘disentangle himself from the murky intertwining daily behaviours’.[3] The artist has inserted himself and immersed the viewer in the ‘thicks and thins’ of an urban text that you would think might be mundane but proves strangely intimate despite the ‘anonymity’ of the subjects.

But from Erving Goffman and other symbolic interactionists we know, of course, that the face is not the sole source of social communication in thick urban spaces. The body talks: gait, pace, posture… The spaces between figures say as much about social interaction as any overt ‘stay away from me’ screw face expression seen on passers-by in busy streets. Urhiofe said, “One of the things I noticed looking at the pictures after I’d taken them is the way people fit together sometimes. Even when you don’t know what’s happening from the thighs up you get some sense of whether people are comfortable or not in close proximity.”

If the artist has repudiated any panoptic regime he has presented the incessant migrational character of urban space. All the more poignant then when we see still figures, solitary inertia, bewildered stasis amidst the vitality. 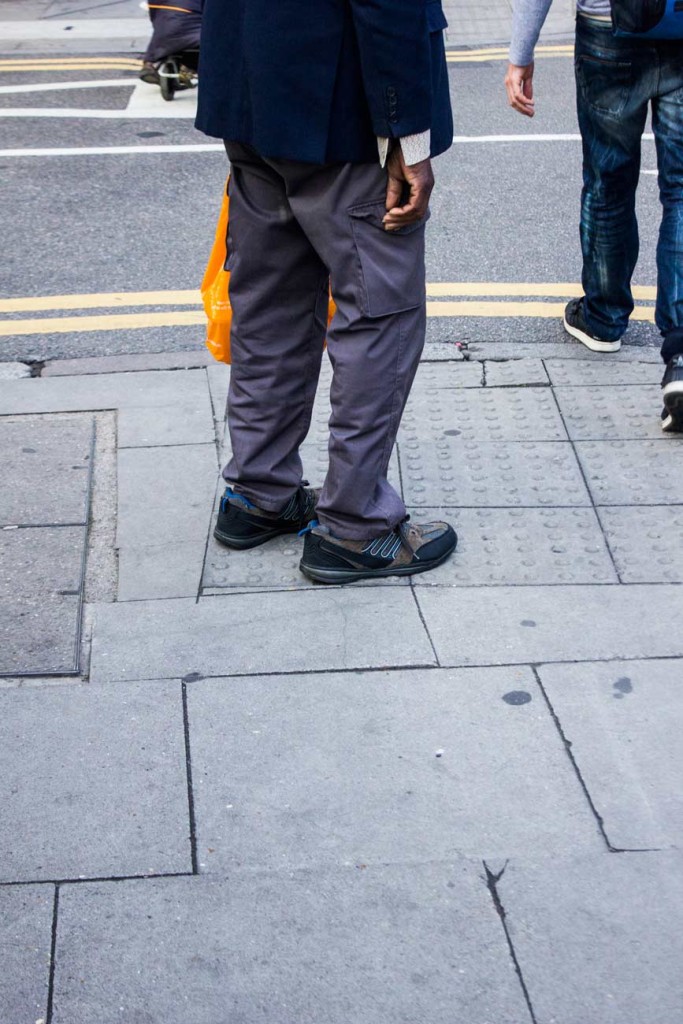 Image after image of shoes, socks, dangling plastic carriers and other bags – these latter often seem such a pathetic stand in for the absent whole – walking sticks, trouser legs, skirts and trolleys… Standing, stepping, striding, sauntering, retreating and advancing, passing and pausing: all these moments of motion set against pavement grid, station platform, park walkway, the grey asphalt street blurring sometimes into a field of dots like photographic grain.

The horizontal surfaces of the city take on an importance that’s rarely apparent in our everyday traverse of the urban environment. Walkers who appear to move in contradiction to the painted lines, the geometry of paving, the strictures of kerb stones, those who disobey the civic directives of flow appear somehow recklessly errant… 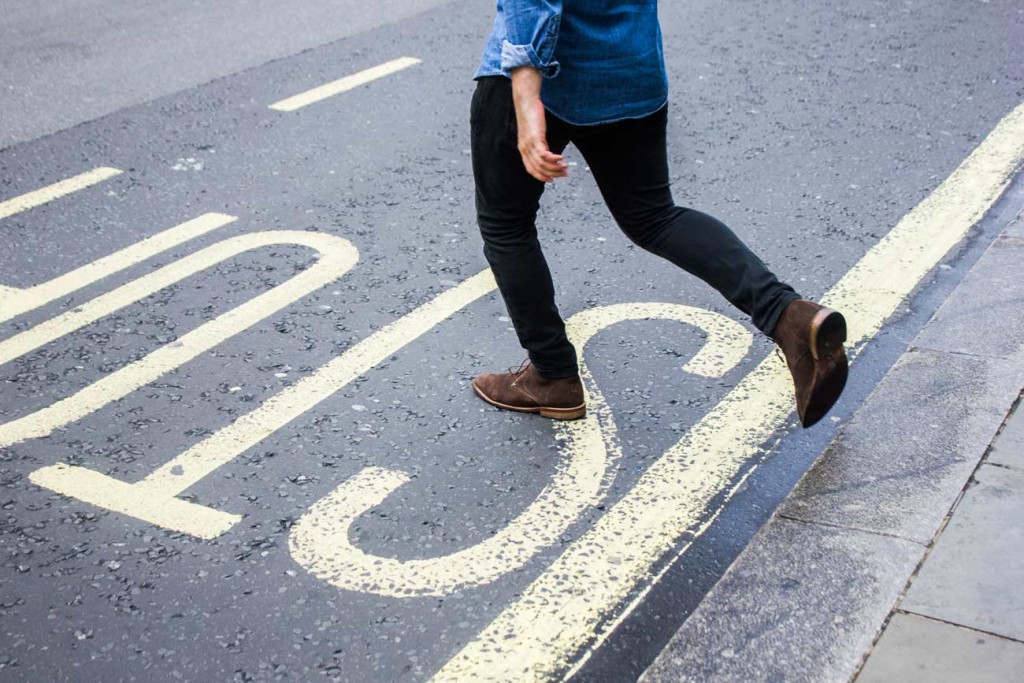 There are very occasional instances of visual narrative, where two consecutive images appear to offer a staccato, momentary relation. But for the most part what ‘connects’ these pages and pages of photographs is the more and less burdensome weight of being. The relentless effort of supporting, propulsion by lumpen or spritely manoeuvre, on sunny or rain spattered days: the assiduous putting of one foot in front of another.

Where Are We Going? – despite Urhiofe graduating from London College of Fashion with a BA in Menswear – is no exercise in capturing the extraordinary, there are very few ostensibly ‘fashionable feet’ on show here. More everyday chronicle than voyeuristic incursion: an exercise in George Perec’s ‘infra-ordinary’ rather than a catwalk collection.[4] The somehow heartrending tone of the photographs is supported by scintillas of text, brief sentences perhaps half-heard on a breezy street: ‘Why did we come back?’ ‘I should go.’ ‘Everyone just leaves.’ ‘Didn’t even say goodbye.’…

De Certeau suggests that to draw a line, to fixedly map a route taken through the city is in fact a form of, if not erasure, then forgetting. Urhiofe’s work here reminds us of the operation of walking, the qualitative character of each and every step. When we see an image of a figure – and a person in real life for that matter – normally we’d scan the face first, looking for an immediate ‘read’, an instant clue as to what, who, how we might best react to what’s in front of us. Urhiofe’s photographs elude any quick or convenient categorizing, he insists we contemplate, consider the minutiae of diversity.

The cumulative effect of Urhiofe’s capture of so many singular moments in their gloriously monotonous variety – ‘monotony’ here having the same productive power as S. Kracauer’s celebration of boredom, in short, a banality that repudiates commodity culture and creates a possibility of ‘generating the authentically new (rather than the old dressed up as new).’[5] He achieves an equivalence to the disorientating nature of moving amidst the teeming urban sprawl. Except it’s as if here the artist has surgically removed the commercial elements, lopped off the ‘designed environment of the commodity [that] has set its designs on us.’[6]

The lack of street signs, street names, Urhiofe’s almost total eradication of commercial and civic symbols – except the odd carrier bag, brand of shoe or borough logo on a litter bin – also contributes to making what we’ve come to expect to be a familiar sight into one that’s disorientating. The viewer is forced to interpret paces and postures afresh. At the same time we are invited to peer closer at the material surfaces of the city – low brickwork, kerbs, cobbles and drains, the hopscotch tessellation of slabs and stones – trying to get a fix on where ‘we’ are or indeed where we are going. This in itself is an interesting forensic exercise but one that doesn’t offer up a clear direction, it remains an unresolved terrain, one of unmapped opportunity and potential not unlike the more and less fluid character of the city itself. 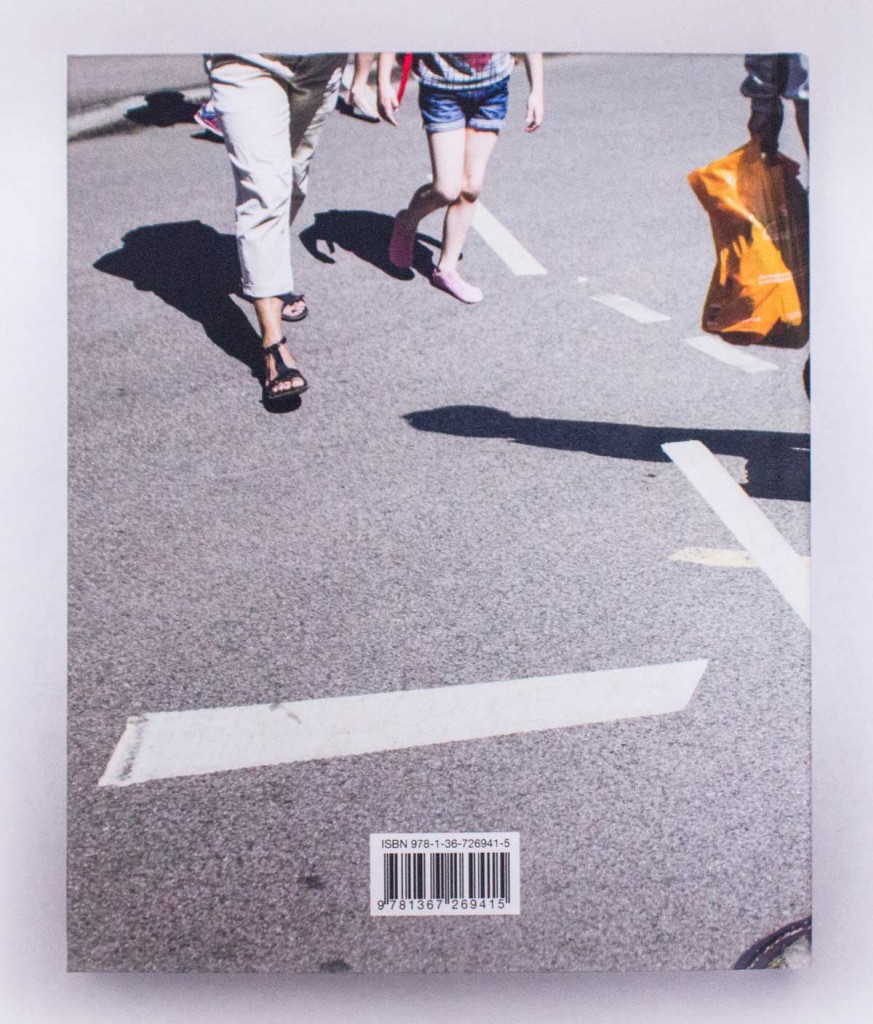 [1] Michel De Certeau (1984) Walking in the City in The Practice of Everyday Life University of California Press, London (p.91)