Michael Peel (1940 – 2017): Artist, Educator and Campaigner for Justice
Based on an alternative version of Michael Peel’s ‘Agitate’ (2106) artwork for flyingleaps and informed by some of his key concerns: Supporting Public Services and the NHS, exposing the myth of venal privatisation that is PFI as well as denouncing War and the Arms Trade.

Shards of self-serving politicians peddling hate and division as political tools… It’s clear from the pages of his final notebook – kindly shown to flyingleaps by the artist’s widow Jane Peel – that, despite his own increasing debilitation caused by Parkinson’s and its effects, to the end Michael was on many levels more vexed by the state of the Nation’s ‘health’ than his own. He will be sorely, sadly missed.

All proceeds  from the sale of this poster are going to support people living with Parkinson’s. Michael Peel’s name appears in facsimile on the sticker on the reverse of the ‘In Memoriam’ 30”X20” posters and they are numbered 1 – 100. 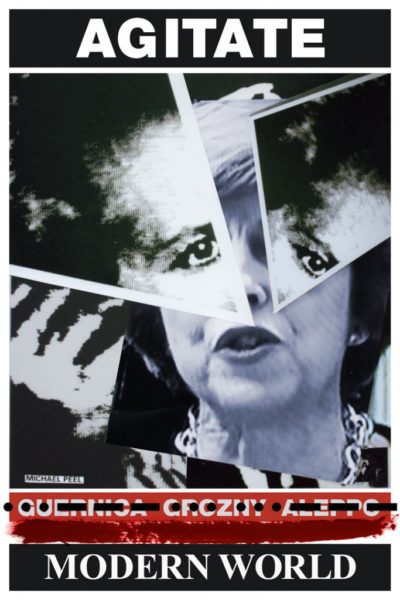