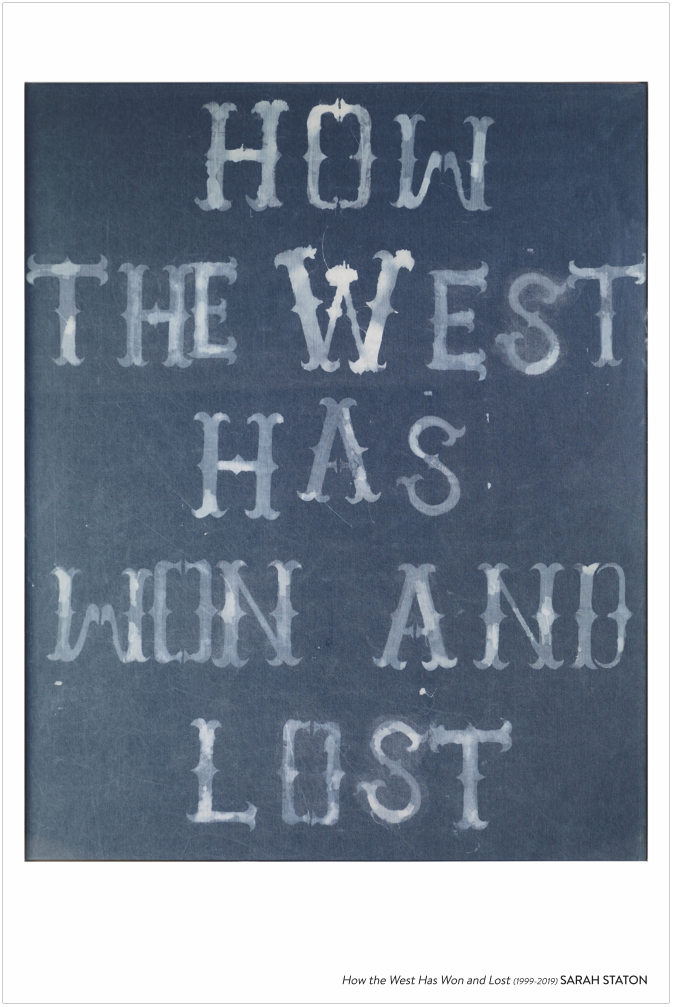 Sarah Staton’s art practice ventures in many directions in terms of materials employed and forms realised. The towering accumulations seen in her Shucks, Sucks, Sticks, Stacks(2007) show at first present as witty postmodernist ‘see what you can make of this then?’ assemblages. But whereas, say, Ettore Sottsass function-flaunting designs elicit a naughty, conspiratorial chuckle, Staton’s beautiful, precarious sculptures point toward lost opportunities. It’s as if they’re saying we have at our fingertips so many visually exquisite, formally inventive languages but their wider promise of societal ease and progress still eludes us.

The Esperanto of Currency(2015) show at Filet gallery also had a somewhat elegiac quality. The bold, graphic symbols of national money – Dollar, Yen, Sterling, Rupee – are distilled, thinned in four small paintings. These once powerful signs/signs of power are finely stitched into metal foils mounted on linen using fine thread, delicate trailings of which hang off the works. Their grounds – gold, copper, black and white –stand for the colour of coins and the black-and-white of balance sheets. The delicate commingling of signs suggest a paucity of cooperation. As Jennifer Thatcher wrote in her ArtNews review:

That desire for international collaboration after the Second World War led to the introduction of the European Currency Unit (ECU) and then the Euro. Of course, the U.K. never joined the Euro and any attempt to replace the English language was always doomed to failure, given the British pride in being useless at languages.

Staton makes works that are visually, materially engaging but can also leave a profound sense of longing. Why didn’t the utopian promise of Modernism stray that far from the gilded cage of art, design and literary expression? How did the post WWII pledge of a fairer world and economic prosperity for all dissipate into such a crass and wasteful consumer society? The ultimately illusory nature of ideas, structures and materials that appear to hold such concrete promise is a constant and curiously affecting refrain.

Staton’sHow the West Was Won and Lost(1999 – 2019) artists’ poster print is a beautiful, poignant if somewhat forlorn meditation that alludes to political and social promises broken, opportunities for a better world missed.