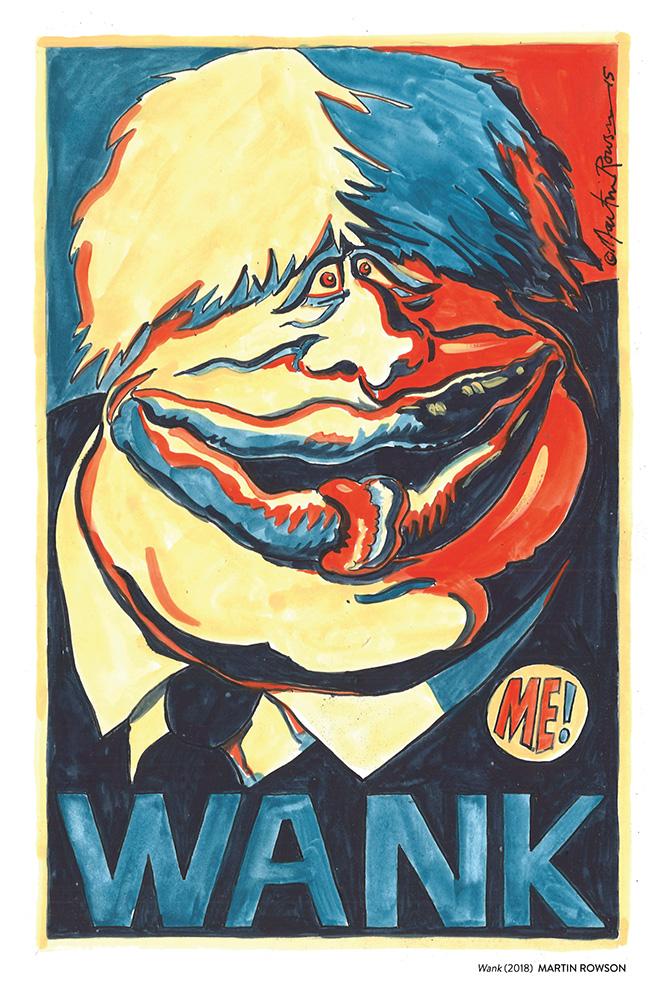 The artist and visual journalist Martin Rowson has been calling out the self-serving piffle of hypocritical, sanctimonious politicians and public figures for something approaching four decades now. It would be easier to name the ‘Fleet Street’ titles he hasn’t worked for. How fabulous then that Rowson’s ‘homage’ to, or searing adaptation of Shepard Fairey’s paean to Barrack Obama – Hope (2008) – has made its way into the flyingleaps' troupe of posters.

Appearing on the streets whilst MP Boris Johnson continued his not so very backroom scheming to be the next leader of the Conservative party, Wank (2018) is a ribald reminder that the good of the people hasn’t always been at the forefront of Bozza’s agenda. With a keen eye for witty, not to say excoriating exaggeration and inventive draughtsmanship, Rowson has an uncanny ability to conjure imagery that time and again deftly counters political hubris. Behind the scathing criticality there’s an ever-restless energy and wiliness that posits, well, a degree of hope. Not everyone is sleep walking through the shit show maelstrom of current affairs. Least of all Rowson, always ready to train his sights on both contemporary and historical events and characters not simply to pillory but rather challenge cant and unveil perspectives that speak truth to power.