If advertising detrimentally affects ‘mental life in the metropolis’ as the Brandalism visual activist outings and AdvertisingShitsInYourHead, etc., would have it then Mark Titchner’s interventions afford some sort of respite or at least a positive gear change. With his variously decorative, quizzical and obliquely provocative works installed in the urban environment perhaps this artists’ text/pattern blazons make a productive contribution to what might be termed the mental or psychological ‘commons’. Phew!

This would seem to be born out by the fact that Titchner is regularly invited to contribute works intended to address specific places and publics – his NO THEM ONLY US (2016) [fig. 1] for the Mayor Sadiq Khan’s ‘London Is Open’ campaign; the zestfully inspirational civic message NOT FOR SELF BUT FOR ALL (2014) commissioned by Camden Council and an ongoing three year long project in his ‘hometown’ of Luton entitled AS YOU CHANGE, SO DO I (2016) – all being examples of this. 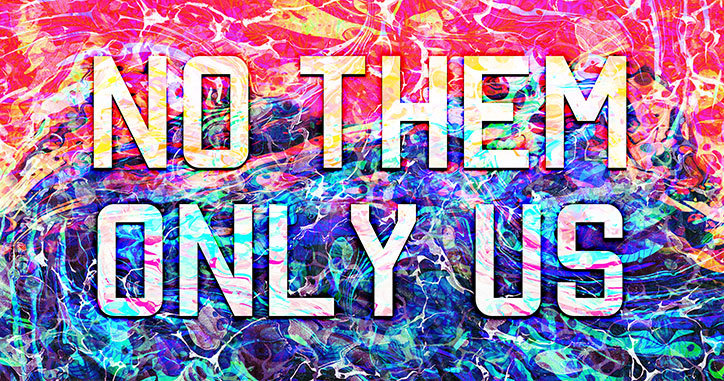 That’s not to say Titchner is in any way a naïve feel-good sloganeer, he doesn’t trade merely in prettified textual sophistry. Sometimes works displayed raise stark, unsettling socio-political and existential questions as in the following phrases which dominated a main shopping thoroughfare in Southend: WHEN EVERYTHING YOU POSSESS IS GONE and WHEN ALL YOU HAVE DONE IS FORGOTTEN both of which featured in the ENDS THOU (2012) project.

What Titchner’s work achieves is the opposite of ‘Newspeak’ in George Orwell’s (1948) dystopian novel Nineteen Eighty-Four. ‘Newspeak’ reduces and fixes meaning, subtlety is rubbed out, forgotten and any alternatives eventually voided altogether. Titchner instead reminds us of the slipperiness, the porosity of language. The manipulative capacity of text/image is more thoroughly played out in longer audio-visual works such as ROSE (2014) [fig. 2]

In the version of this multi-screen audio-visual work that I’ve seen there are two screens, one atop another in a large darkened room. It is a ravishingly mesmeric presentation of the persuasive, uplifting potential of rhythmic imagery and life-affirming text. But one that ultimately unsettles as the initially supportive cajolery gives way to a more aggressively relentless and enfeebling onslaught: AND YOU ARE NOT NEEDED, AND YOU OBEY… flashing up until finally the roses of the title fracture into what looks like an imploding planet. As Titchner has remarked:

My work is really about how we receive ideas [regarding] ourselves from outside of our lived experience, that leads to all kind of expectations about how or what our lives should be. With Rose I wanted to make something very melodramatic and affecting. A work that you experience first and then process afterwards and one that makes you aware that you are being manipulated.  ‘Rose’ uses very simple language and very simple shifts in language to move from what appears to be a supportive tone to something much more oppressive and threatening.1

Obviously works by Jenny Holzer and Barbara Kruger spring to mind in terms of artistic precedent but why stop there? Commandments inscribed on stone tablets; the dedications and celebrations on triumphal arches; the more and less obviously ‘speaking architecture’ throughout the ages; the great lie: Arbeit Macht Frei… For good and ill these ‘elevations above the ordinary world’ could act as productive a comparison with Titchner’s works as the various means of outdoor advertising that are more often associated with the artist’s practice. 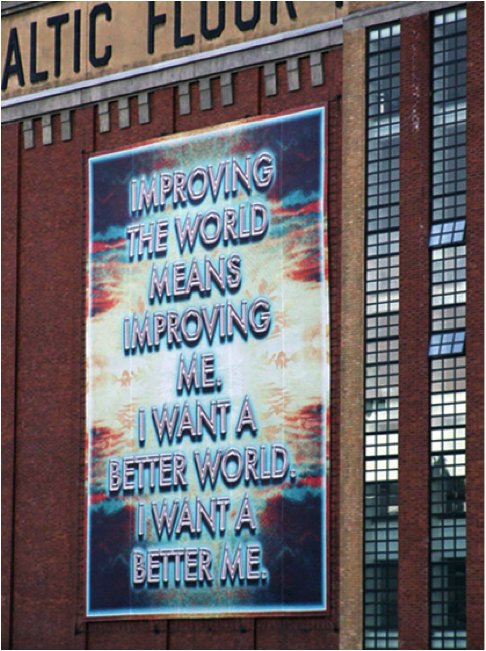 Where advertising seeks to flog a product or lifestyle, artworks like IMPROVING THE WORLD MEANS IMPROVING ME. I WANT A BETTER WORLD. I WANT A BETER ME. (2008) [fig.3] displayed in banner form on the side of the Baltic Flour Mill building in Gateshead seems anything but a fleeting hard-sell. It’s more meditational mantra. However idiosyncratic the provenance of Titchner’s texts – song lyrics, obscure scientific or alchemical screeds, publicity copy, dodgy self-help titles – they imbue spaces with something more plaintive, vulnerable, more human than brand-speak. That the works afford traction, offer pause for thought, may also have something to do with the hallucinatory, ‘slowing down’ effect of such ornate, sometimes ecstatically over-wrought ‘grounds’ out of which the artist’s words so often emerge. Additionally it’s because the emphatic intention to manipulate, to objectify that we usually associate with texts appearing in the urban environment is absent here, more questions are posed than answers proffered. 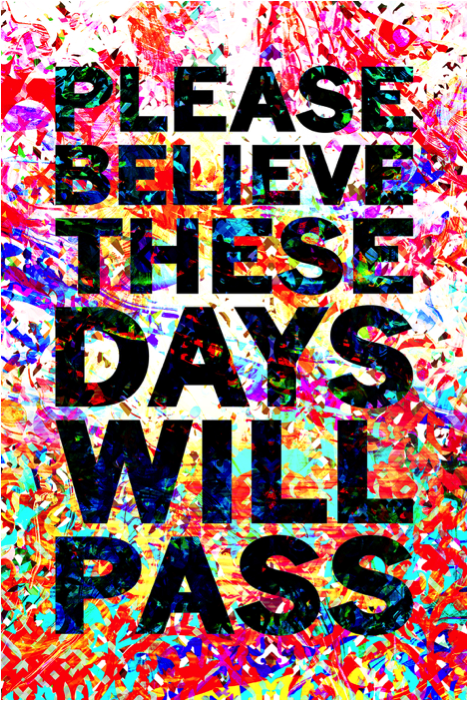 The PLEASE BELIEVE THESE DAYS WILL PASS (2016) [fig.4] poster for flyingleaps is a case in point. PLEASE BELIEVE… The very possibility of conviction in our post-factual age is immediately tested with this imploring kickoff. At one level it’s an irrefutable statement, a straight momento mori. Another reading brings into question social and personal circumstances. If life is shit, hang on in there. If things are going okay, cherish the moment. Place, time and shifting circumstances reverberate. Post Donald Trump being elected president of the US – depending again of course on your point of view – then PLEASE BELIEVE… becomes a conceptual talisman, a lucky charm or spell to bring some comfort. In Britain the hope perhaps is that whatever configuration leaving the EU takes maybe Titchner’s work can operate like a ‘beacon’ demanding that we might, OR RATHER WE HAVE TO, work harder together to quell the nationalism, bigotry and xenophobia unleashed, stoked by Brexit. Then again, considering the psychedelic confetti texture that accompanies, even partially erases Titchner’s ‘message’ of arguably sombre quietus, we’ll leave it to the artist to introduce a degree of irreverent wit into the proceedings… ‘I’d describe it as a religious tract having a nervous breakdown.’2 This seems a fittingly dada-esque elucidation to throw in the face of current turns to demagoguery and the blatantly populist, racist and misogynist direction of global power politics.