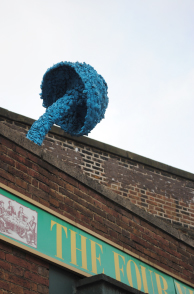 Sad to report there’s a species of urban mushroom that for me no longer qualifies as wild. Six years ago comically bright button caps appeared to have seeded themselves in the brittle clay of East London’s skylines. Pedestrians witnessed their ludic proliferation around Hoxton and Shoreditch. In 2012 they arrived in my hometown of Deptford. Their everywhereness bringing to mind an imaginary mycelium, a cob-web filament articulating the more and less visible spread of the messy city, field of decay and opportunity. In 2015 funds were raised so that a mega hyphae might be sited outside a bar in Berlin. But what’s at stake here isn’t simply the shift from street art illegality to the officialdom of commissioned works. In the apparent transformation from ‘wild’ to ‘legit’ the mushrooms have arguably taken on a somewhat fetid aspect.

I’m referring, of course, to the fungi creations of street artist Christiaan Nagel. In their earliest incarnation these cartoonish beauties sprung from and appeared to cleave to crusty rooftops or cracked walls. I first thought they were grown using expanding builder’s foam, a material for filling voids that is then lost beneath a finer finished surface. The artist’s website informs us that he employs a version of this material favoured in the construction of surfboards. Nagel leaves his medium raw so whilst they retain the classic mushroom silhouette their texture is more worm cast-like.

It’s this expanding filler material itself that in part lends these seemingly spontaneous forms a gauche and gawky fascination. It’s also the material I think that must have determined their original scale. From the pavements they appear no more than a metre tall at most. That is, not too small so as to fall into the occasionally cutesy realm of Slinkachu’s oeuvre. This artist photographer’s minute figures in urban settings usually manage to walk the line between melancholic and humorous but occasionally they do slip into the cloying. At the other extreme Nagel’s works to date have not suffered from the sometime bombastic gigantism that characterises Claes Oldenburg’s Clothespin (1976) or Jeff Koons’ (1993) topiary-like West Highland Terrier Puppy. I’d argue that it is only in an urban setting, not a park or gallery, that both of these major artists’ works of amplification achieve more than the spectacular visual quip.

Likewise, I’d think Nagel’s fungi rely on a magical arrival amidst urban agglomeration. They draw materially and metaphorically on the space of the city. Materially, the wormlike appearance of stalks and caps is formed from tight spurts, squiggles of foam that read like mark making against the urban sprawl. Metaphorically, because without stealing out from the compost, substratum shit of the time woven and worn city, they would just be the addition of a decorist. An art production concerned merely with a picturesque effect.

It’s also the material that lends an appropriateness to these works, to their occasionally chunky though more often tottering, pathetic and windblown stalks. It’s a form that appears to belong to the city’s leftover spaces more than the real flora that grows there. Foam seems more apt than the purple buddleia pokers that grow in these places. If one of Nagel’s creations were to fall his faux fungi look as if they might take flight, drift like a dandelion seed rather than plummeting onto the heads of passers-by.

In addition to the medium eliciting a curious smile Nagel’s caps and stalks are or were fantastically crass colours. Noddy red, left over house paint blue, contraband Rizla green (too green), that’s what I mean by crass: discordant, cack-handed DIY disaster hues. The buddleia’s brilliant purple compliments stained London brick. The early mushrooms sprouted in the face of tastefulness. From their awkward stalks to a cap that often became a permeable lattice, scribble of colour in the sky, they blew guileful raspberries at gentrification. Now I learn they are being reproduced using more bona fide sculptural materials: glass fibre, steel… What next, bronze? In my opinion Nagel’s mushrooms don’t lend themselves to such a transformation: from the humble or mundane into a precious material as in Gavin Turk’s Bag (2000). With this work Turk’s gorged black bin liner is cast in a semi-precious metal and painted to look just like, well, a black bin liner. Or with Susan Collis’ practice, in which she makes drips of paint out of mother-of-pearl or wall plugs out of turquoise. Turk’s and Collis’ re-presentations question both viewers’ aesthetic expectations and the veracity and value of our ocularcentric times. These artists’ substitutions are directing our consideration not simply towards outward appearances – their works look the same as the real thing – but to discourses that inform our thinking about the world around us.

When Nagel’s mushrooms are rendered in any superior material they forfeit enchantment and migrate toward Habitat tat and the over-priced conversation piece. I couldn’t help thinking this when I saw a blood orange Nagel mushroom on a glazed apartment balcony recently. Far from a mysterious and cheeky flowering that prompts questions about the nature of urban dwelling these institutionalised, legal fungi don’t make me want to look more closely at the world around us. The new Nagels make me want to hurry on as if to avoid the whiff of ready cash, commodification. 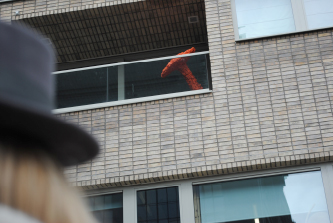 The artist’s early production offered bright blemishes of relief, thought provoking freebies for both wage slave and slash careerists alike. So, while a part of me of course wishes Nagel well and I’m happy for him to have raised sufficient funds to erect his giant German mushroom. I fear, in contrast to his early interventions on the city, these countenanced and commissioned versions come across as spectacular but somewhat rootless.